How Do Bookmakers Decide Odds? 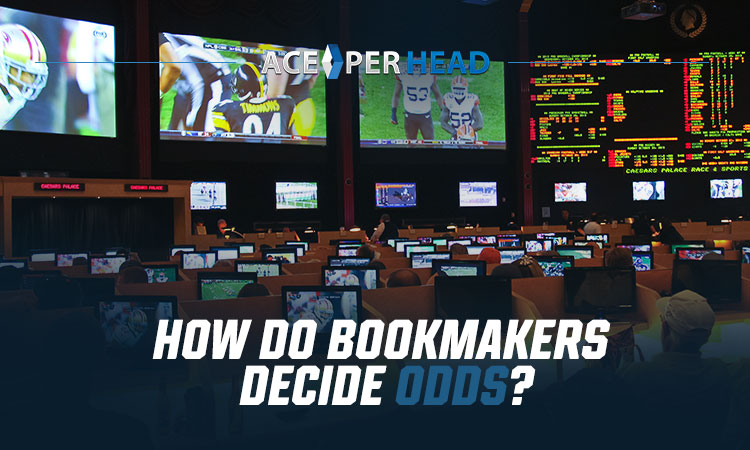 A bookmaker is someone who sets lines or odds on betting options on various sporting events. Generally, casinos, pay per head companies, and post-up shops would be considered the biggest bookmakers in the world. Casinos and post-up shops take the action for themselves and pay per head service companies provide a platform for local agents to take action from people they know.

Bookmakers try to set the line in a way that makes it attractive for people to want to pick either side of the bet. The goal is to try to balance the book so there is close to an equal dollar amount of bets on each side of the game. On every bet, there is a vig or juice, which is often 10% which is when you see a line of -110, but this can also vary and increase or decrease depending on where the action is going. If a bookmaker can balance a book with equal wagers on each side, and if the bookmaker is taking the action himself, he can’t lose because he just keeps the juice or basically the surcharge of making the wager.

However, balancing books doesn’t happen a lot, because the public often takes the favorite or the better team, no matter where the line is. But that’s where the bookmaker tries his best to make the line attractive enough on the underdog side, to get people to want to bet on that side.

For example, if the Packers are playing the lowly Detroit Lions in Green Bay, the line could open at -10.5 -110 for the Packers, which means the Packers would need to win the game by 11 points or more for a player betting the Packers on the spread to win that game.  If all the action comes pouring in on the Packers, then the bookmaker will raise the line, and possibly even the juice, to say -13, -115.  The bookmaker does this to try to attract more action on the other side, and the only way to do that is by making the Lions’ point spread higher, which will then hopefully cause people to start betting on the Lions.

Another major factor that affects how a bookmaker decides to move the odds is by seeing where the smart or sharp money is going. There are professional gamblers in the world that have their own algorithms and formulas on what a line should be on a game, and if they see a line they deem is off, then they will bet it. For example, if they see the Packers line at -10.5 but compute that it should be -14, they will bet as soon as they see that line, early in the week, and bet on the Packers -10.5 since their metrics show the line should be even higher.

An experienced bookmaker at a quality pay per head bookie shop will have these types of sharp bettors flagged in their system and will be notified as soon as they make a bet. Once they see them make a wager they will also raise the line, since they know the sharp players have valuable information that causes lines to move.  In addition, these sharp players often bet in groups and have many accounts around the world, so quality bookmakers can see numerous accounts betting on this same game and line at the same time, which validates that the line needs to be changed accordingly.

Be a Local Bookie

It’s important to use a premium pay per head service that has a team of very experienced bookmakers watching and moving the lines for you 24/7, that way your players don’t get favorable lines that move slow. The difference between a half a point and a point on a game is often the difference between a win and a loss, which directly affects a local bookies´ overall profits.

AcePerHead.com is a PPH service that has the sharpest and fastest moving lines in the business, which helps agents to be even more profitable compared to using lower quality services, so if you want to be a local bookie give them a call at 1-800-909-5193 to get set up immediately, and have one of the best bookmakers in the world setting your odds.